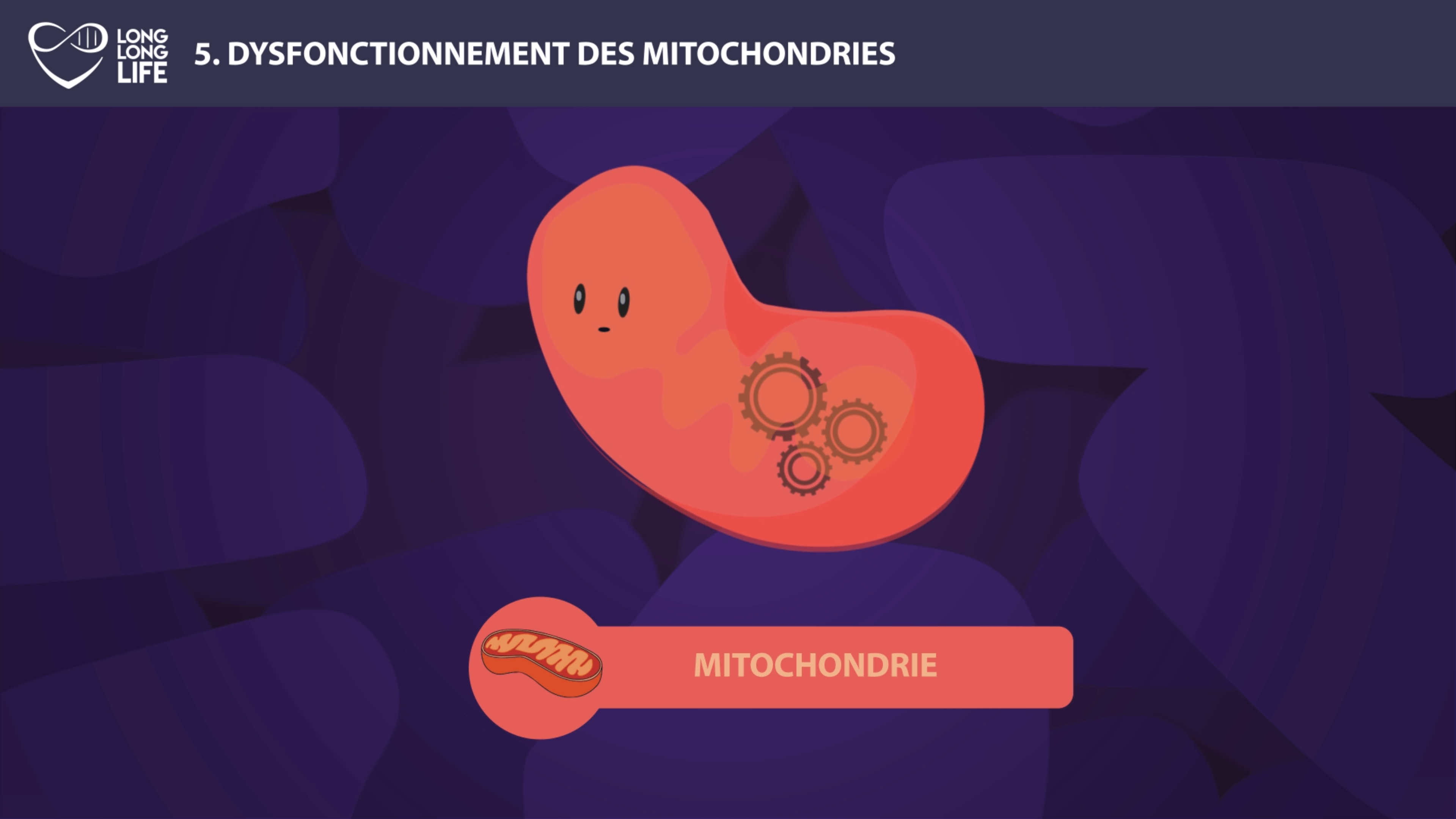 We will discuss here a fifth identified cause of aging: mitochondrial dysfunction.

Mitochondria are organelles present in each of your cells. Their role is to maintain cellular respiration and the creation of ATP (adenosine triphosphate), which is the main source of energy essential for all the mechanisms of the human body. In short, mitochondria are the power plants of your cells.

So, who are our suspects?

First, oxidative stress. It is a mechanism that involves, among other things, molecules called free radicals. These free radicals have, as their name suggests, atoms that are free to bind other molecules by oxidation and thus create damage to your cells. Aging has long been linked to wear and tear caused by oxidation, but the reality may be more complex. Recent studies have shown that increasing levels of antioxidants, which fight free radicals, has no effect on life expectancy, while increasing the level of free radicals in some models can increase life expectancy.

One possible explanation: this oxidative stress would force the activation of potentially beneficial regenerative mechanisms, such as autophagy, which we mentioned earlier. We remind you that autophagy is above all a means of defending your cells: when an organelle no longer functions properly, the cell will cannibalize it to allow its survival. Autophagy of damaged mitochondria, also called mitophagy, is the main route of elimination of these mitochondria. Free radicals released by oxidative stress could generate a beneficial survival signal.

In theory, it is now assumed that as we age, cell stress and the number of cell lesions will increase. The levels of free radicals in the body would increase in parallel, in order to preserve the body. Above a certain point, these levels would stop maintaining cellular balance and could aggravate age-related problems.

The role of free radicals is therefore not yet clear to scientists, it is an issue that is really debated.

The second cause that would link the mitochondria to aging could be communication between the cell nucleus and its mitochondria.

And finally, however, it is not excluded that mutations in our mitochondrial DNA may also come into play. So we’re going to talk about them a little bit, even if they’re not necessarily predominant.

Although the impact of these mutations is not as deleterious as nuclear DNA mutations, scientists believe that mitochondrial DNA is likely to be more sensitive to mutations. Indeed, a mitochondria, a kind of energy center of your cells, is not a comfortable area to avoid genetic mutations. Especially since the repair mechanisms of mitochondrial DNA are much less advanced than those of nuclear DNA.

To sum it up, this would explain why the accumulation of mutations in the mitochondrial genome could gradually take an increasingly important place in the aging process.